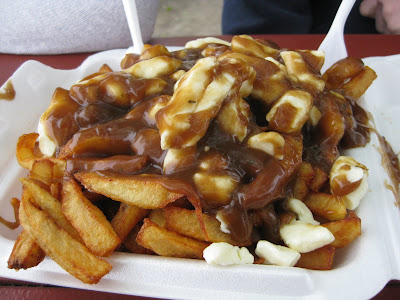 You guessed it. This is the regular-sized poutine from S & G Fries, located at 1845 Carling Avenue, right next to both the Beer Store and the Produce Depot. They claim to make the Best Poutine in Ottawa and have many testimonials around the place to substantiate this declaration. 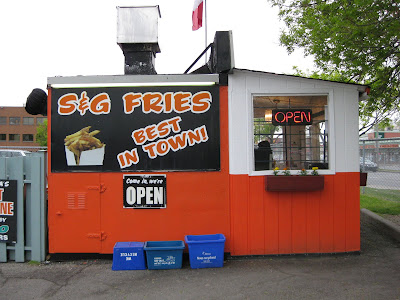 We ended up here because this afternoon was 'get organized for the prom day' and my son had a knowledgeable friend along for consultation. The payoff to her was lunch at S & G Fries. She accepted in a heartbeat. MP claims to be pure French Canadian stock and can speak with a voice of authority on poutine, as it is the national dish of Quebec. 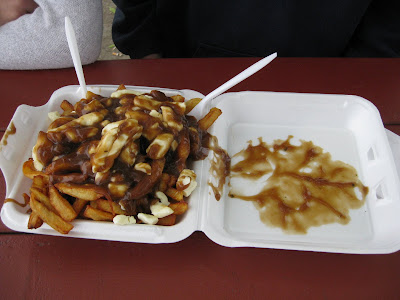 MP gave the poutine at S & G Fries high marks. "The fries were cooked properly." No elaboration on what that meant. I took her at her word. She was also pleased when she saw the sign for St. Albert's cheese curds. Being within 10 minutes of the St. Albert Co-op Cheese Factory, MP says she often enjoys the curds so fresh that they are extra squeaky! As early as the end of the 19th century, master cheesemakers in a charming Eastern Ontario village were already manufacturing a highly renowned Cheddar: the St-Albert. Not all native Quebecers share the praise that MP has put on the standard of curd expected in her perfect poutine but suffice it to say, I really wouldn't know any better. St. Albert is a small town close to the Quebec border, but still in Ontario, so perhaps that is where the judgment lies.

When we asked MP for her final verdict, she said she thought the outstanding poutine actually came second to the poutine she loves and has had frequently at the Blooming Onion, once situated in the Byward Market, but now relocated to a spot near Cyrville Road & Maxime St. She is supported in this pronouncement by XPress' annual reader's poll in the past. 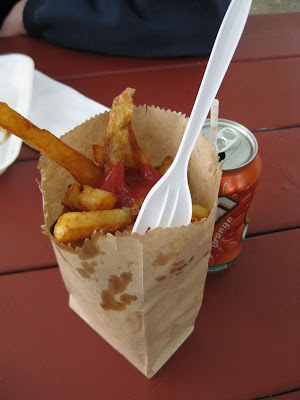 Although I don't have the pedigree that MP carries to best judge the perfect poutine, my tastebuds alone tell me that a trip to S & G Fries for any kind of chip craving, will undoubtedly prove to be a positive experience. In the language of the Poutine Chronicles, this place is at least 4.5 curds out of 5.

Is S & G Fries the best poutine in Ottawa?

Posted by One of Ottawa's Real Foodies at 9:19 PM