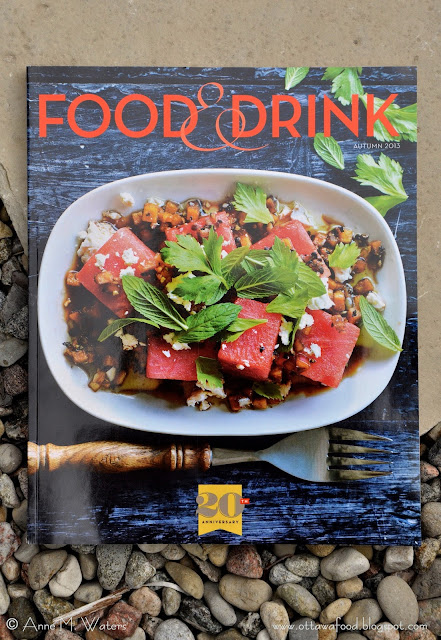 The 20th Anniversary edition of the LCBO Food & Drink magazine hit the stores last Wednesday.  I am just getting to reading mine now.   I wish I could say there are still some copies out there, but that might be a lie.

If you haven't started reading it yet, go straight to page 187 and work your way through Origins: Food & Drink by Robert Hercz.  Although it is right at the back of the issue, it really feels like the setting for the story that unfolds as the Food & Drink team chronicles their view of, well, food and drink, in this province over the past 20 years.

First off, I have to tell you that one of my loyal followers of the blog's Facebook page has told me that he is a big fan of Food & Drink and figures he has every issue printed except eight from the earlier years. So if you are also a collector but considering a purge, I want to make a plea on Ken's behalf that you give him first crack at your stash.

The issue will have you reminiscing of recipes past that have now moved into your regular repertoire.  Editor Jody Dunn shares her all-time favourites on page 22 in Editor's Choice. A few that come to mind for me that we have made time and time again are:
I too am a long time reader of the magazine and one thing that I have come to appreciate is the ability to search Food & Drink's recipes on-line.  Although they aren't all up there, many favourites are.  I was forever ripping recipes out of magazines and now I have given that up.  Thank you Food & Drink for making so many recipes available on-line.  My clutterless husband thanks you too.

Thanks to social media, many of the Food & Drink personalities are accessible to us through Facebook and Twitter.  Lucy Waverman and Ruth Gangbar of Foodography PEC are two that come to mind.  I like hearing their voices regularly and seeing what they are up to.  That connection helps, I think, to keep me brand loyal.

But LCBO Food & Drink themselves seem a bit late to the social media parade.  There is no identity for the magazine itself, that I have found.  Just LCBO proper.  And their Facebook page is only 9 months old.  The LCBO Twitter account has 14 tweets.  I am hopeful that this soon will change.  We would love to see and hear more of you, Food & Drink, in our everyday conversations.

I know it is hard to pick when making the many lists for this issue.  No surprise, I suppose, that it is Toronto-centric.  With each turn of the page I anticipated a mention of Ottawa, or anything at all from eastern Ontario.  The Ottawa Byward Market was listed in Farmers' Markets, though I wish the nod had been to the Ottawa Farmers' Market.  Being a producer only (no resellers) market, it feels more authentic to me.  Jamie Stunt, actually now formerly of Oz Kafé (by maybe 4 months now) is mentioned by Julia Aitken in Chefs On The Rise. A natural pick, considering his performance in last year's Gold Medal Plates competition.  Because of Jamie, I had Oz Kafé as one of my top 5 favourite places to eat in Ottawa.

Overall, I really enjoyed the magazine.  Congratulations on 20 years.  You have created something that causes frenzy in LCBO stores every 8 weeks.

So fellow readers, have you had a chance to go through the Autumn edition yet?  If I asked you to tell me your all-time favourite Food & Drink recipes, which ones would they be?
Posted by One of Ottawa's Real Foodies at 9:11 PM