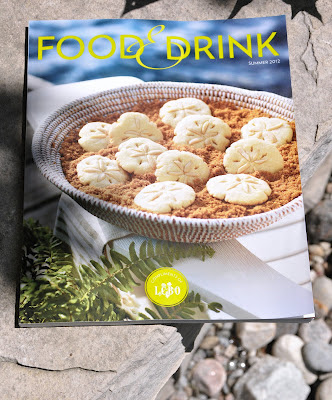 Don't judge a book by it's cover.

If it wasn't for my bi-monthly habit, I am not sure I would have picked up the Summer issue of LCBO's Food & Drink this time around. The sand dollar cookies in a brown sugar 'sand setting' conjured up feelings of baking heat, beating sun and just plain sweaty. It seemed faded. Too beige. Too much like burnt July.

Maybe a tall, cool glass of something from the prop stylist could have grabbed me and drawn me in. I am someone who needs a big splash of vibrant colours to sell me 'summer'. So where was the colour? It was tucked inside. And, thankfully, lots of it.

Perhaps the heat is getting to me, but there were other things that seemed jarring with this issue of LCBO's Food and Drink.

In Grade Eh Wine & Cheese by James Chatto and Pat Crocker, Pat's beautiful recipes would go totally unnoticed if you didn't read every word of the article. There was no tag line with the picture, naming the recipe, to draw you in. I happen to be a big Pat Crocker fan, currently working my way through her book, Preserving. But tell me, when you were flipping through the pages, did you notice any of these?
The cheeses chosen for the article are some of my favourite (including Lacey Grey from the now defunct Fifth Town Artisan Cheese dairy, as of early May. Darn those deadlines that are months ahead of the publication release date.) But I can't help but think that it would be more than the well-matched wine that would showcase their beautiful flavours. Pat is a true talent with preserves. Her flavour combinations can give a dish that special je ne sais quoi. Dig deep to find her recipes and do give them a try. Better yet, buy her book, Preserving.

One of the problems with a publication that comes out every 8 to 10 weeks, it is hard to know what recipes to pitch, to make sure they are relevant and timely. For produce that tends to yield on the cusp of two issues or a year that has unseasonal weather, recipes can end up in the 'wrong issue'. A real challenge for writers and editors. I was thrilled to see such coveted recipes as Stockyards Spareribs and Hardy's Pulled Pork, in Smoke Signals by Nancy Won & Lucy Waverman. I just wished that they had been in the Early Summer issue as our barbecue season has been well underway for months.

Another case of 'which issue' might also be the playlist. At the beginning of May we were prepping our playlists for the Olympics, set to begin the end of July - then months away. Meanwhile the hot weather came so early. I always look forward to what Rick Sherman and Earl Torno pull together. This time they rallied around the "sounds of summer". A hot weather classic favourite for me is (Sittin' On) The Dock of the Bay by Otis Redding. Check out the entire list on iTunes.

Enough of my quibbles and on to the fun stuff. Included in your cellophane is the Wine Country Ontario Travel Guide 2012. It includes a very handy Official Map of Ontario's Wine Route. Tuck it in your car now before it folds into your stacks of magazines, only to surface at the time of the great culling.

Doesn't Brenda Morrison have the best job, searching out 'must haves' for her column Inspired Ideas? With tattoos all the rage now, I wouldn't let her Signature Styles feature, a cattle style branding iron, anywhere near my 20-something-crowd on a party night! It is meant only to brand your dinner meats. The device does come with three letters. If that is your party gig, then might I suggest you consider an M and an O and an other M, when picking your letters!

Some additional recipes I will keep on my radar:
Plan ahead: The Autumn issue hits the stores in 10 weeks on Wednesday, September 5th.
Posted by One of Ottawa's Real Foodies at 2:04 PM No comments: 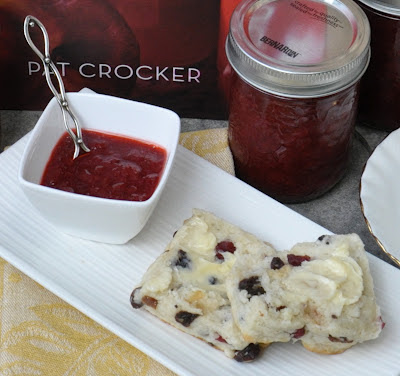 Pat Crocker's Strawberry Sauce is now my new jam. It uses very little sugar compared to conventional jams, allowing the taste of the strawberry to stand forward. She also provided depth in flavour to this creation by incorporating molasses and sweet raspberry vinegar. I think a twist of the pepper grinder would have made a good seasoning as well.

I wanted a thickness closer to jam. Sugar plays a big role in the thickening process. Where a batch of jam typically takes 6 1/2 to 7 cups of sugar, this recipe only takes 1 cup. Although she suggests that the mixture cook for 15 minutes, I kept it on the cook-top bubbling away for closer to 30 minutes. The sauce was no longer runny but a bit less viscosity than a lemon curd. It could still pour off the spoon. Not something typical of jam. This batch would have yielded 4 250 ml jars but because of the extra reduction, my sauce produced a little less than 3 1/2 jars.

Pat is also a big proponent of food safety and she is thorough in her reinforcement of proper sterilization of the jars and also the scalding of the snap lids and rings. Always use new snaps and rings when preserving.

Although my jars of sauce are going in the freezer, and I could forgo the water batch method, sterilized jars are still a critical step in making this sauce.

Pat suggests this sauce is a wonderful accompaniment for dishes like pancakes, waffles and ice cream. I think it would also work well along side duck or poultry. I am even considering it as my secret ingredient in my killer strawberry margaritas. My first taste of the sauce was a smear on top of punchy fresh Gouda cheese on a piece of Crazy Grain bread from Art-is-in Boulangerie.

Pat Crocker's book, Preserving, has been by my side since the day I bought it in late winter. Not only are there recipes laid out by the seasons, there is a wealth of information about many of the fruits and vegetables we are going to encounter throughout our growing seasons. As a very active CSA member, I can't imagine being without this book to help me to maximize the gifts in my food baskets - weather it is ensuring proper care or just using every bit of it in the most delicious way. 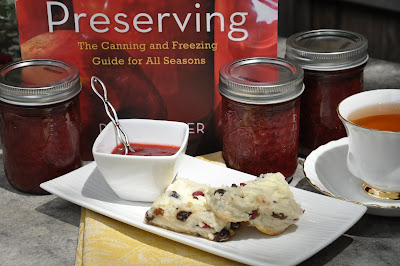 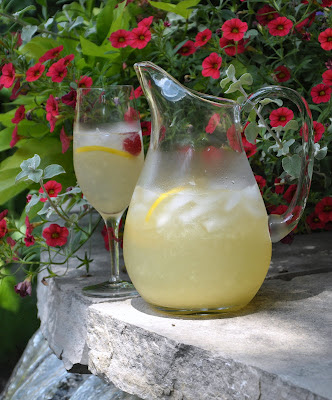 Today is the first full day of summer. The heat descended on this town early this year and had us reaching for a thirst-quenching drink to share as we lounged on the the patio.

Over the past few months we have squeezed many lemons and tried a number of versions of easy-to-make lemonade.

We have settled on this very simple recipe that balances the zing of a freshly squeezed lemony taste with a hint of sweetness to eventually give ease to your pucker. 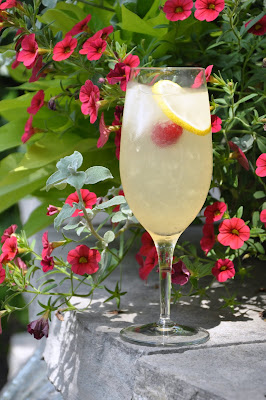 To make the simple syrup, combine sugar and water in a saucepan. Bring to a boil over medium to medium-low heat. Do not stir. Let the mixture boil slowly for 5 minutes. Cool to room temperature.

To juice the lemons, make sure they are at room temperature. Before you squeeze them, wash them in a hot water bath. This helps to bring out the juice when squeezing. You will typically use 5 to 6 lemons. Preserve as much of the pulp as you can.

To make 'ice cold water', fill your 4-cup measuring cup with 2 to 3 cups of ice cubes. Then fill up the measure with cold water to the 4-cup line. That way your ice cubes won't water down the lemonade too much. You do want it to smack!

Combine the juice, ice cold water and simple syrup in a beautiful glass pitcher. Include thin slices of lemons when you serve. Let the ice melt out a bit before serving. A few raspberries can be a nice treasure to discover at the bottom of your glass! 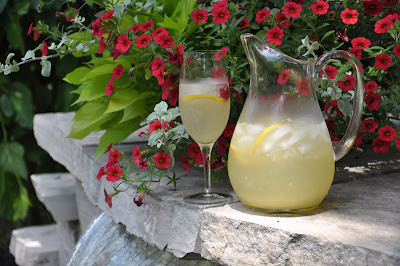 Posted by One of Ottawa's Real Foodies at 2:04 PM 6 comments:

Email ThisBlogThis!Share to TwitterShare to FacebookShare to Pinterest
Labels: Recipes 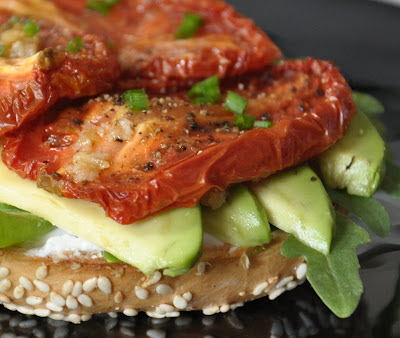 The Danes are well-known for their open-faced sandwiches (smørrebrød). There are many tried and true recipes that have been handed down through the generations. Preserving these recipes is an important part of our culinary heritage. My food friend, Marcus, is doing a superb job of that on his food blog, Danish Open Sandwiches (Smørrebrød).

The underlying principle of smørrebrød is to provide a healthy meal, using the local delights on hand from the fridge and pantry, and allow the flavours to stand out boldly but to also complement each other. Bread is minimized and serves as the canvas. (The traditional bread used is rye bread.) Danes also take great pride in making their smørrebrød visually pleasing and much fuss is made of food styling. It is healthy, flexible, affordable and food life cycle friendly.

As is the Danish custom, smørrebrød is eaten with a knife and fork. It is considered a civilized way to approach the meal but it is also very practical as some smørrebrød can be vertically challenging.

The choices in our fridge and pantry in the 21st century, especially here in Canada, is so much more culturally diverse. It makes the possibilities endless for the modern day smørrebrød. Maybe even more favourful! (Some of the foods on today's lunch are more associated with Jewish, French, Mexican and Italian kitchens.)

Today's smørrebrød lunch was made using:

If I had pesto on hand, I would have put a smear on the goat cheese or a few dollops on the tomatoes.

The best smørrebrød shops in Copenhagen, like Ida Davidsen, have a two week wait to get a reservation.

My dream for the Ottawa restaurant scene would be to have an adventurous and creative chef embrace smørrebrød and begin Ottawa's Smørrebrød Revolution.

And please don't take as long to open as Aamanns in NYC. It has been 'opening soon' since last October. I'm still waiting... 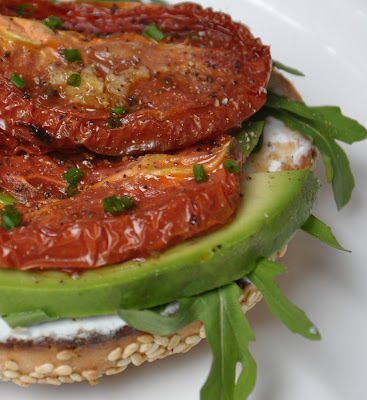