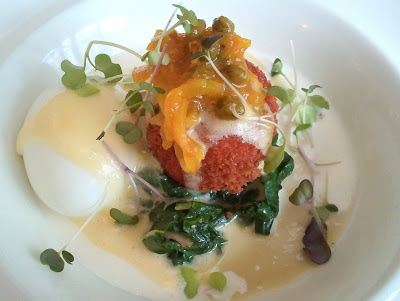 As a couple, our weekend mornings are often lazy and slow to get moving.

The first button pushed as our feet hit the warmth of our kitchen's oak floor, is to rev up Silvia The Espresso Machine. That girl is almost vintage now at 11 1/2 years. She's bullet-proof reliable  We have fun getting all science-y - frothing our milky micro-bubbles, measuring our grinds and weighing the espresso output, all in an effort to pull the perfect shot.

Eventually the curtains are drawn on our full wall of windows, letting the light flood in. No matter how grey and snowy, it brightens our morning nest.

Sometimes there is music. Sometimes CBC. More often than not we just sit quietly together and read. No one more hurried than the other. It is relaxing and easy. Truth be told, it is me who is slowing down for this togetherness feeling.

As time passes, the growling starts and the stomachs call out. That morning feast can be anything from steel cut oats to crêpes and fruit salad. We let the fridge and pantry decide.

But when the mister is not home, my 'type-A, morning girl' personality usurps the agenda. Over the past month I have happily been accepting brunch dates and even venturing on my own.

Here is some of what I have been tasting as I brunched around town.

What have I learned? I do like eggs but I like them best soft and jiggly.  Go easy on the carbs. Hold the bread and toast. Load me up on veggies, if you can. They are full flavour and the colour makes for pretty. If you can make a killer coffee, my head will turn. Price and location do matter.

Big bright windows, cozy seats and a relaxing atmosphere will have me feeling like I am right at home.
Posted by One of Ottawa's Real Foodies at 3:25 PM No comments:

Ah, the sizzle of butter hitting the smoking pan. The clanging of stainless ladles. Hot plates on the pass-through. It all gets our juices flowing. Ottawa loves to eat out!

Our dining landscape has undergone a transformation over the past decade - in part due to the top talent coming from one of our local culinary programs. A program where the students have been continually encouraged, guided and humbly assisted by a local food enthusiast and journalist, Ron Eade, now semi-retired from the Ottawa Citizen where he most recently held the role as Food editor of 14 years.

The Algonquin College School of Hospitality and Tourism is launching the Ron Eade Culinary Bursary with a student-led fundraising dinner on Thursday, March 21st. They want you to join the party! The evening’s MC, Derick Fage of Rogers Daytime Ottawa, will keep the energy high.


The bursary is the brainchild of Scott Warrick and Mario Ramsay, both chef professors at Algonquin College, who also give tirelessly for the students.

Chef Warrick says, “Eade has always been one of the culinary programs’ and our students’ biggest supporters.”

They had considered a tribute dinner to salute Ron for his years as Food editor and as a way to say thank-you. Chef Ramsay said, “That just wasn’t fitting. It had to be bigger. More lasting. Tribute dinners are soon forgotten but a bursary is a legacy.”

The support so far for the fundraiser has been tremendous and to see the Ottawa community rally behind the school’s culinary students means a lot to them.

Some of the successful and well-known talent in our local kitchens are graduates of Algonquin College. We, the dining public, have been the benefactors of the strength of the school’s program and the commitment these students show to work passionately in this field.

Some will say they have been spurred on by the enthusiasm constantly being conveyed by Ron Eade. Not only does Ron, an accomplished home chef himself, write regularly about the ‘Ottawa Food Scene’, he is a very active participant in food events that allow budding culinary students to showcase their skills.

As the grads team up in this city’s kitchens, Ron has had a passion to inform the public regarding their progress, ideas, and whereabouts.

Hear what some of those graduates have to say:

WALID EL-TAWEL, Executive Chef at Restaurant e18hteen:
"When I heard about Ron stepping down from the Ottawa Citizen I flew my culinary flag at half mast and I think I speak on behalf of most hospitality professionals in Ottawa."

He went on to say that he thinks having a bursary for culinary students is a motivator. “It makes the students work twice as hard in the hopes of receiving it.”

As a 2006 graduate of the Culinary Management Program, Chef Walid is grateful for his schooling. “The Algonquin program taught me a lot. Under the supervision of some great chefs, who pushed me very hard, I came out of the program ready for the work force.”

JOHN LEUNG, Chef and Partner in new, yet to named restaurant located at 87 Clarence St:
“Ron loves what he does and it shows. Why would anyone attend multi-events across the city in the same day! ”

John has felt Ron’s tenacity first-hand. “My first encounter with Ron was the first Juno award ceremony in Ottawa when I was the chef at Restaurant e18hteen. He wanted to write about what I was serving for the After Party. I told him it was strictly confidential by EMI and I could only tell him the menu after the party. His response was, “Nobody wants to read yesterday’s news.” So we compromised by sneaking him into the party by the back door.”

From the class of 97’s Apprenticeship Program, John agrees bursaries can make a difference. “Not having to worry so much about tuition would be a bonus.”

Chef Leung has fond memories of school and how it helped him grow. “I represented the school to compete in a CCFCC (Canadian Culinary Federation) apprentice black box where I won both at the provincial and national level. I was proud of the support from the school and its faculty. It definitely made me a better chef because of that.”

KATIE BROWN ARDINGTON, Chef de Cuisine at Beckta Dining & Wine:
Chef Katie says she has had limited direct interaction with Ron but she sees the difference he makes and has thrown her support behind the fundraiser. “I think this is a great opportunity for the Ottawa food scene to come together and realize the impact and involvement that Ron has had on our industry.”

When she was in school she says there was just a general bursary. “Having a bursary specifically for the culinary program opens opportunities for just those students.”

AUCTION ITEMS CONTINUE TO COME IN:
The generosity of the graduates for this event is attention grabbing. What they are not saying with words, they are saying with deeds.
The list goes on:
Chefs Ramsay and Warrick are keen to get the community behind growing the bursary. Although tickets are limited due to space, they are opening up the auction to all.

Ten days before the fundraiser dinner, auction items will go up on a special eBay on-line auction site. Stay tuned for more details for how it will roll out.

Meanwhile, start planning your bids - and plan big. After all, it’s for the students.

HOW CAN YOU HELP SUPPORT OUR NEXT CROP OF TOP CHEF TALENT?
At a recent retirement dinner, these words were captured in a video by Ottawa Tourism Director of Communications, Jantine Van Kregten, to best describe Ron by his friends, peers and industry supporters – honest, passionate, full of integrity, generous, relentless, booster, interesting, entertaining, excitable, straight-shooter, legendary, tenacious, unique, curious, doer, fair-minded, friend.

So it comes as no surprise that the Ron Eade Culinary Bursary will be awarded to a culinary student after their first semester, who has demonstrated a commitment to their craft and who has, like Ron, demonstrated passion and determination to succeed.

It promises to be a fun-filled evening with mouth-watering food and enticing auction items - all going to support a great initiative. Come out that night to meet Ron and many supporting members of Ottawa’s food community.

IN SHORT, THE PARTICULARS OF THE EVENING:

Posted by One of Ottawa's Real Foodies at 8:18 PM No comments:

HOW TO: Boil Quail Eggs 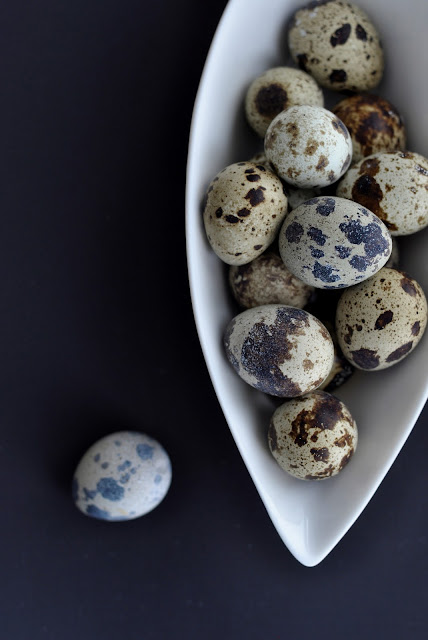 I am dedicating this post to my wonderful university roommates who have always been so supportive of my love of food and my desire to fuss about the details. After all, we eat with our eyes.

My mother would often use half of an almost-hard-boiled egg to break up the sea of red in our bowl of tomato soup.  I don't know if this is a Danish tradition as I have never seen it since.  A fleeting connection with that memory had me wondering how hard it would be to use a quail egg instead when my food presentation is much smaller.  Say a dipper bowl or shooter glass for a canapé.

It worked like a charm. They are just darling! 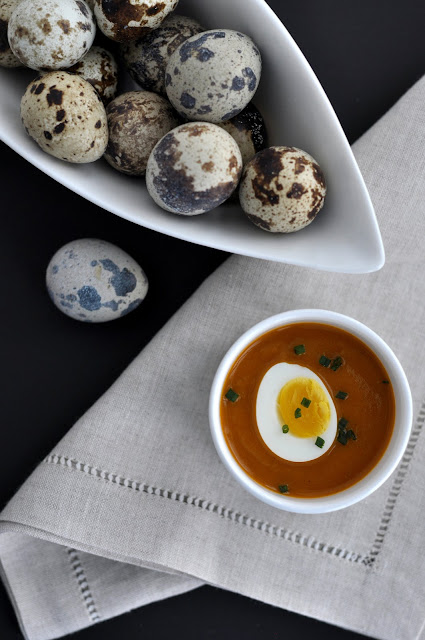 HOW TO: Boil Quail Eggs 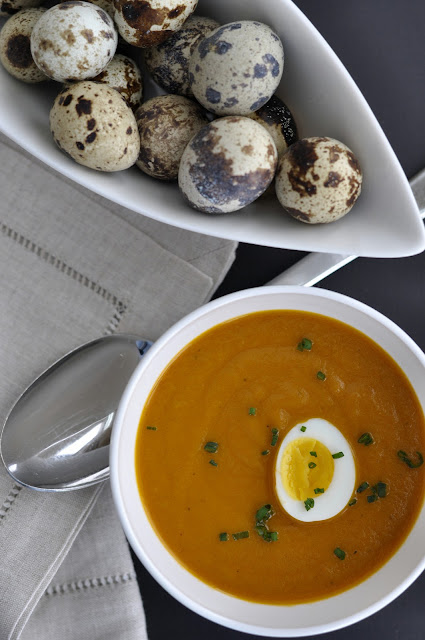 I purchased my quail eggs from Farm Boy. The brand is Ferme Laroche et Fille from Val-des-Monts, Quebec. There were 15 in the carton and they cost $3.49.
Posted by One of Ottawa's Real Foodies at 5:27 PM 1 comment: