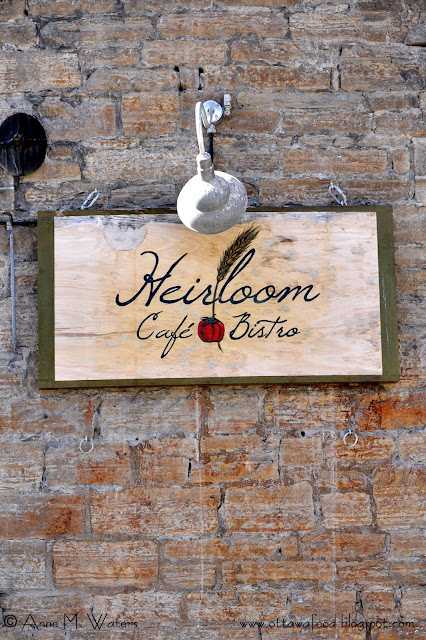 While foodie-loping in the Valley yesterday, I stopped in Almonte for lunch.  The Heirloom Café Bistro is situated in the ground level of the town's old historic Victoria Woolen Mill, now converted into condominiums. They have been part of the Almonte food scene for three years.

The high ceilings leave open the rustic wood timber beams.  Large windows surround the perimeter of the dining room, allowing full light from all sides. It is an elegant setting for relaxed fine-dining, right down to the white linen tablecloths.

The lunch menu offered a broad selection, plus a few daily specials. My soup being one of them.  Food is locally sourced from such places as:  Back Forty Artisan Cheese, Mariposa Farm, Maplelane Farm, Perth Pork Products, Art-is-in Bakery, Equator Roasters Coffee. 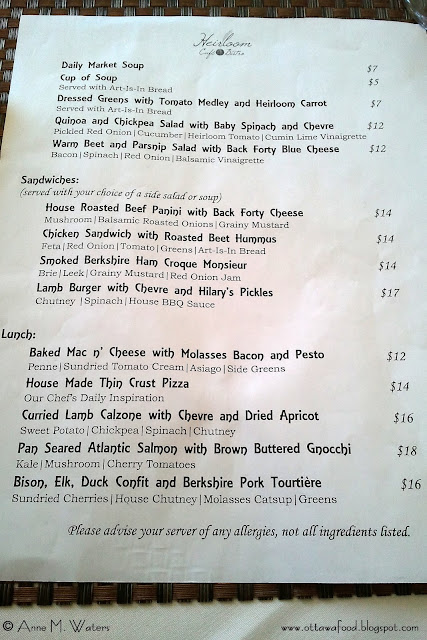 I started with their Daily Market Soup, the Mushroom and Brie Bisque. As the name would suggest, it was quite rich and I appreciated choosing the smaller serving. My wedge of Art-is-in Bakery Dynamite baguette was warmed slightly. 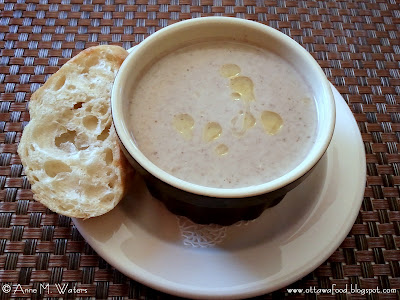 The Warm Beet and Parsnip Salad was amply portioned with the titled root vegetables and used as it's base fresh, fresh tender baby spinach. 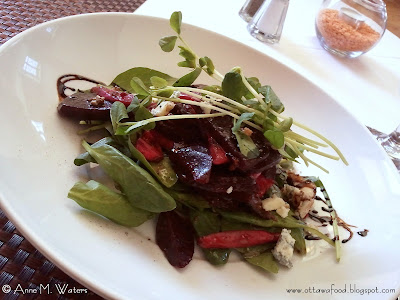 Thin threads of red onion were woven through and the dish was crowned with young, bright pea sprouts. There was a tease of  Highland Blue morsels, Back Forty Artisan Cheese's Royal Winter Fair ribbon winner. 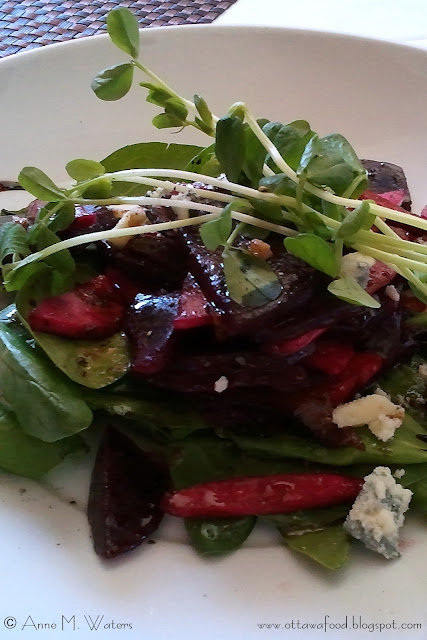 As I settled in for slow bites of my salad, I unearthed a mother lode of Perth Pork Products' smokey bacon. 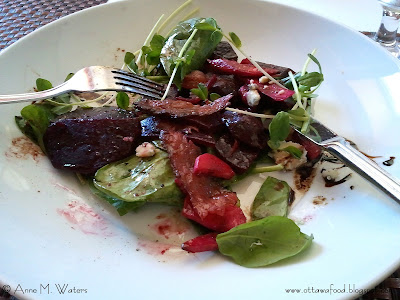 Prices are quite reasonable for the setting and food quality. Service was attentive and helpful. The food exquisitely prepared.

Google Maps says it is 37 minutes door to door. Their brunch menu has caught my eye. I shall return. 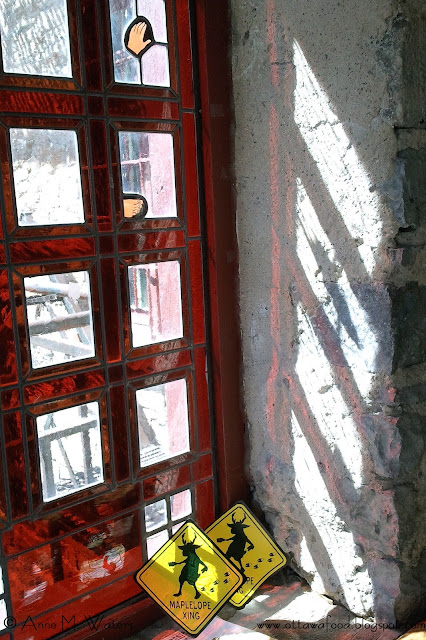 PS. I first read about this place from My Macaroni Pie back in July 2011.

Posted by One of Ottawa's Real Foodies at 10:58 PM 2 comments: Links to this post 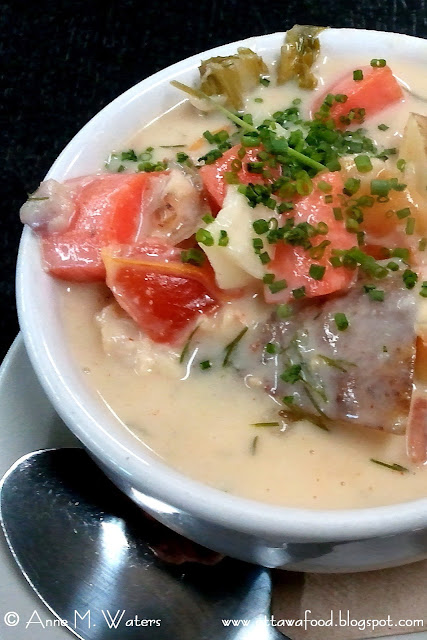 I went to Art-is-in Bakery (or is it Boulangerie?)﻿ for bread shopping and ended up staying for lunch. My first time trying their midday fare.

I didn't want a big honking sandwich. Many are priced around $11. More than I cared to spend for lunch and a price that implied 'size'. So I took on Kevin's Clam Chowder.

The KCC, named for owner-baker-chef Kevin Mathieson, was loaded up with clams plus big chunks of potato, celery, carrots and tomato.

The lightly creamed broth was absent of 'glom' and had a bit of spicy heat to warm your cheeks. The kind of lip-smacking taste that leaves you wanting for seconds.

No fish crackers here. Teetering on the plate was a wedge of the famous Art-is-in Boulangerie's Dynamite Cheddar, Chive & Jalapeño baguette. 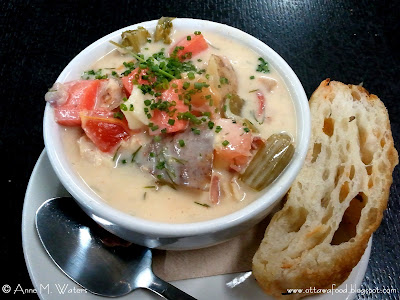 Posted by One of Ottawa's Real Foodies at 7:19 PM 4 comments: Links to this post


"The launch of Algonquin College's new Ron Eade Culinary Bursary has been a resounding success." Event co-ordinators, Scott Warrick and Mario Ramsay, both chef professors at Algonquin College, are beaming.  Although there is still work to be done on the tally, Chef Warrick has already announced that, "over $20,000 was raised through the fundraiser."


On March 21 Restaurant International at Algonquin College was filled with the who's who of the culinary food scene here in Ottawa.


But on this evening, these big names were actually the supporting cast to a dynamic team of soon-to-be graduates coming from Algonquin College's culinary programs.  Led by student, Trish Grey, the graduating class planned and prepared the evening's dinner, under the watchful eye and supporting hand of Chef Mario Ramsay.


This was a special evening.  It not only launched the bursary but it was an opportunity to fête local food enthusiast and journalist, Ron Eade, now semi-retired from the Ottawa Citizen where he most recently held the role as Food editor of 14 years.

All in good fun, the reception started with a signature cocktail called 'The Irascible'. I loved it. The Algonquin Bartending students, adding a few trendy touches, cleverly designed a drink that was a deconstructed combination of three classics - Whiskey Sour, Manhattan and the Old-Fashioned. Sour, Bitter, Salty and Sweet, representing the many facets of the evening's guest of honour.

Our lively Emcee Derick Fage from Rogers Daytime Ottawa did a fantastic job at keeping the tempo high and managing the traffic at the podium.

Michel Savard, Dean for the School of Hospitality and Tourism, the second largest culinary school in Canada, told us that 70% of the students in the program need financial support.  He shared many moving stories of students in the program fighting to obtain their basic needs for food and shelter. The cost of books, uniforms and supplies are on top of that. He encouraged us to be generous with our support of tomorrow's chefs today.

As for our fine dining, we received a solid showing from the students. So much so, that Gay Cook took to the podium to rave about her main. Really rave.


With an auction set-up on eBay ten days before the event, the general public was able to participate in the fundraiser's shopping.  A few items were set aside for live auction by surprise auctioneer extraordinaire, Stephen Beckta. With good humour and lots of ribbing, Stephen, much to his own surprise, handily pried open a number of wallets to join in on the antics of the auction.  "It is for the students after all!" he interjected whenever the pace slowed.

As guest of honour, Ron Eade was pleased with how the evening went, "It was really quite a success, and I'm delighted to play a small role in the success of future Algonquin culinary students."

"The intent of this bursary is to assist a culinary student after the first semester who has demonstrated a commitment to the craft and plans to pursue career development in the culinary arts. It is not just about academic excellence, because not every great chef of tomorrow may be academically inclined today. Rather, it’s about passion and determination to succeed, two hallmarks of distinction that denote excellence in any field."

Ron was quick to emphasize, "Let me assure you, those with passion and commitment stand out from the pack every time.  Those are among the people I want to encourage."


*** Direct donations are still being accepted through CanadaHelps.org (tax receipt for full amount) ***
Posted by One of Ottawa's Real Foodies at 4:57 PM No comments: Links to this post

Creamy Coleslaw With A Kick 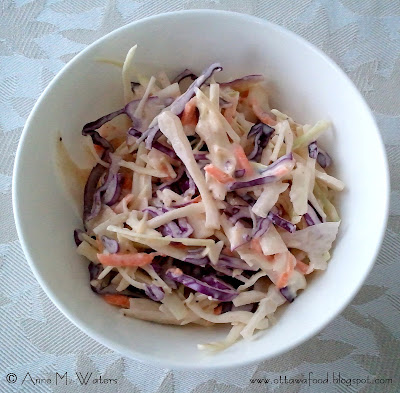 Some people like their coleslaw with oil and vinegar dressing. Some prefer creamy.  We swing both ways.  Our creamy coleslaw dressing has evolved and now it has an extra 'kick'.

I have faithfully been following the directions for Bobby Flay's Creamy Coleslaw Dressing to a tee. Over time though the formula has been shifting to adjust to our own tastes in seasonings and also to deal with substitutions when our pantry has been lacking. Our latest concoction is worthy of repeating.

For the base of my slaw I shred one head of green cabbage and part of a red.  Sometimes as much as half, depending on the size.  The carrots are also size dependent, but usually I grate two or three.  Let your colour sense dictate your blend.  I find the proportions are more about looks than taste. Some think of cabbage as peasant food so I do like it to be a snappy dresser.

How has my latest dressing varied from the original by Bobby Flay?

I have upped the mayonnaise and sour cream to make sure there is enough dressing. Partly because the volume of slaw has increased from adding the red cabbage. And cabbage head sizes can be so unpredictable. I now add celery seeds and less celery salt.  The vinegar is less, as is the sugar.

The latest big change - dry mustard has been reduced to make room for the kick of horseradish. Truth be told, we ran out of dry mustard. The horseradish idea seemed like a stroke of brilliance.  The darling son's idea.  I take no credit. My observation - aversion to last minute grocery store runs can be the mother of invention.

I put the pre-dressed slaw together and store in a Ziploc bag with all the air removed.  I only dress as much slaw as I am using in a serving to keep it crisp. Coleslaw is a wonderful side dish for ham or pork of any kind. Terrific as a picnic food. I like it just as a midday snack.

What makes your creamy coleslaw dressing pack the punch?

Combine all the ingredients together and adjust to taste.  The dressing can keep chilled in the fridge for a few days.
Posted by One of Ottawa's Real Foodies at 1:04 PM No comments: Links to this post 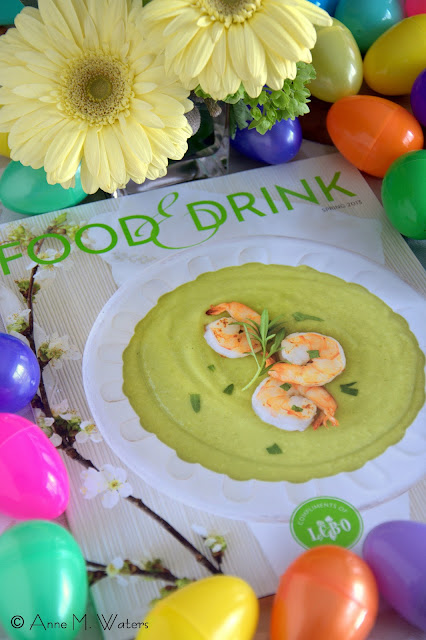 As the snow flurries danced Fantasia-style this afternoon, I was more than ready to find warmth between the pages of the latest LCBO Food & Drink magazine - their Spring issue. It actually came out March 6, but me with my globetrotting life missed being in the province that day. Home a week later, I went right from the airport to the liquor store and came up empty-handed.  Not surprised, really. They go like hotcakes.

My game plan was to raid an issue from any old friend's powder room.  That's your trick too when you miss one, isn't it? But as good fortune would have it, Easter Bunnies galore had magazines to offer me the last few days. I accepted only one.

How sweet to see Ruth Gangbar as Kat Tancock's Trendspotting highlight on page 32.  Ruth Gangbar, well-known food stylist, is branching out with her new endeavour FoodographyPEC - workshops being presented in The County for those wanting to learn learn about food styling and food photography.  Ruth's team has conducted two workshops so far and the third is planned for mid-July. 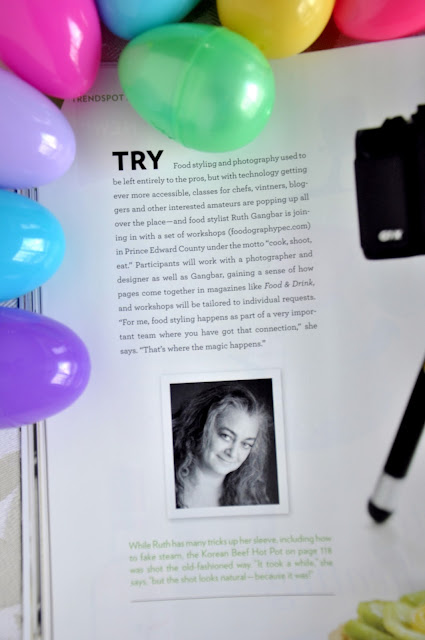 Watching Ruth work, you see how intuitively she approaches the set, mixing textures, colour and light.  She pushes for authentic.  No mashed potatoes subbing in for ice cream. It has to be the real deal.  She uses extra tricks though to keep the food looking fresh and sizzling. The magic tools in her massive traveling kit are eclectic. I'm sure airport security would have a fit if she ever took that bag as carry-on. Congrats Ruth and all the best with FoodographyPEC!

You should see how deep the snow is still on my front lawn. I am having a bit of a hard time imagining morels, spring onions and rhubarb springing from the ground before the next Food & Drink issue crosses my threshold. But a girl can dream, can't she?

Plan ahead: The Early Summer issue hits the stores in four weeks and two days on Wednesday, May 1st.
Posted by One of Ottawa's Real Foodies at 9:18 PM 2 comments: Links to this post