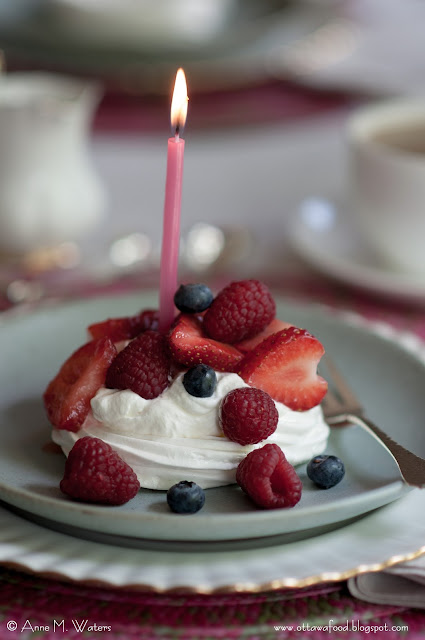 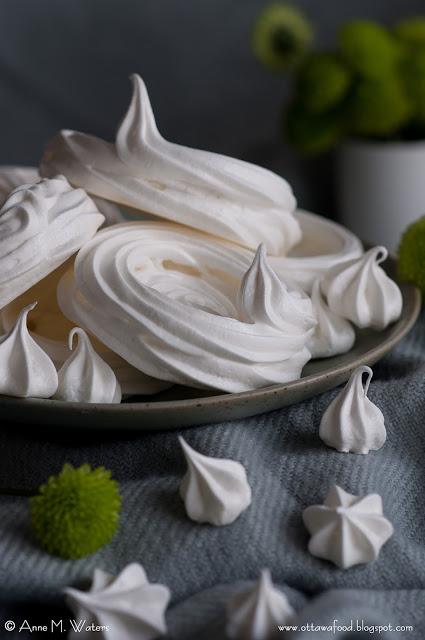 The meringue nest is the base for many timeless desserts. You're only limited only by your imagination. Fillings could be whipped cream and berries, lemon curd and fruits, ice cream and compote, or mousse and chocolate shavings, or ....

Maybe crumble them up to make Eton Mess! 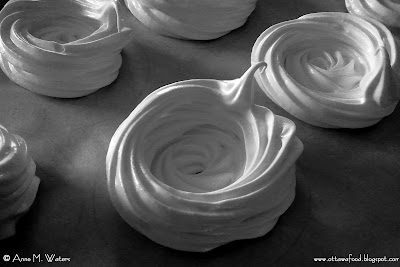 Method
Cover two baking sheets with parchment paper.  Make four 2 1/2" circles on each sheet.  Turn the parchment paper over, penned side down.  The penned circles will show through as a guide when forming the nests.

In a clean bowl and using an electric mixer, whip egg whites, cream of tarter and lemon juice together until the whites double in volume.  When the whisk is drawn through the whites it should hold a peak.

Still whipping, add the fine sugar one tablespoon at a time.  Make sure it is fully incorporated before adding the next spoonful.  When all the sugar has been added, the whites will be stiff and glossy.

Put the whipped egg whites into a 18" piping bag with a 825 open star piping tip.

Pipe starting in the centre of the circle and continuing in a spiral until your penciled circle is almost filled in.  Then pipe a ring or two around the edge of the base to form the nest. If you still have meringue leftover after making the nests, pipe 'kisses' on the open spaces on the pan.

Let the nest sit for about 30 minutes before putting them in the oven. It helps to preserve the cup shape without the sides tipping over during baking.

Bake for 2 hours. Turn off and leave in the oven for at least another 2 hours.  The nests and kisses should be completely dry and crisp. Cool completely before removing them from the parchment.

The meringues store well in the freezer in an air-tight container.

Do not make meringues on a humid day. The moisture in the air will affect the meringues from aerating properly and also drying properly. The end result will be chewy.

Make sure your bowl and whisk is completely clean of debris and moisture.  Otherwise, your whites may not aerate well. Or at all.

It is important to not add the sugar too early.  The whites need some structure first in order to successfully incorporate the sugar.

Do not add too much sugar at once.  Just a tablespoon at a time. Also, make sure it has been completely whipped in before adding more.  Overwhelming the whites with sugar put them at risk of deflating.

If using a hand mixer, do not use the top speed.  The process will go too quickly. You need to take time to add the sugar and have it 'melt' into the egg whites before the whites are fully whipped.  Not too slow either!  If the sugar is not incorporated properly, you will get sugar beads forming on your nests as they bake.
Posted by One of Ottawa's Real Foodies at 12:13 AM